What Is A Pinsa Pizza?

Over the years, the pizza game has continually evolved to the point we are at today. We see various different styles of pizza being baked to cater for different tastes. Just think about it for a second… there’s Thin Crust, Deep Dish, Stuffed Crust, Focaccia, and even Calzone. The list goes on and on, and we all have our particular favourites.

When we think of the evolution of pizza, admittedly, it’s easy to think of the modern-day. But in truth, we’re just the latest generation to join the pizza-loving craze! What if we told you that pizza innovators existed over 600 years ago? You heard that right. The ancient Romans created a special type of pizza base that is still highly demanded today. The Roman Pinsa Pizza! It was deemed so good by the Romans that ancient priests would even offer Roman Pinsa to the ancient gods.

What is Pinsa Pizza? 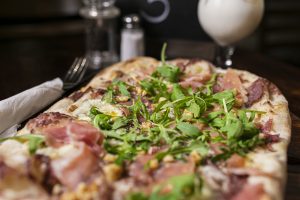 So, what is a Pinsa Pizza? The word ‘Pinsa’ derives from the Latin word ‘Pinsere’, which literally translates to ‘push the dough by the hands’. Roman Pinsas are also known by some as Pinsa Romana – but they’re exactly the same thing. The base of a Pinsa Pizza is made using a different method to your usual pizza, and in return, this creates a unique end result.

Pinsa is described as ‘a cloud-like Pizza’ that has crispy textures on the outside and a super soft and scrumptious inside. The light, airy crusts and bubbly Pinsa Romana base contribute to a terrifically tasty pizza that all pizza lovers MUST try!

Difference Between Pinsa and Pizza

The dough is made from a combination of soy, rice and wheat flour which makes Roman Pinsa a much healthier alternative to traditional pizza. The dough production process differs from your usual pizza as it’s fermented for up to 72 hours and baked at a lower temperature. This ensures the dough is highly hydrated as it contains up to 80% water – leading to a number of brilliant health benefits! 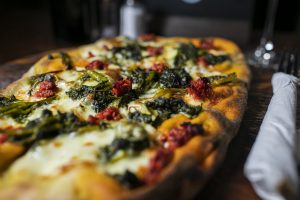 Pinsa is Easily and Naturally Digestible

Pinsa is easier to digest due to a number of contributing factors. The highly hydrated dough helps the food naturally pass through the digestive system faster.

That’s not all… during the maturation period, complex sugars and proteins break down into simple sugars and amino acids. The 72-hour fermentation process also breaks down starches making Pinsa pizza naturally easier to process.

The simplicity and healthiness of the ingredients alongside the cold cooking method makes Pinsa a more low calorie, low carb and low-fat alternative to traditional pizza. The Pinsa is, therefore, a great tasty treat for those looking to eat natural and healthy food. Win, win!

Fancying a Pinsa Romana? You will even more now… Roman Pinsa has less starch, less glutens, less cholesterol, less sugar AND less fats! The dough is also made using all-natural olive oil and contains no added shortenings, additives or preservatives throughout the recipe.

If you ever fancy a delicious and healthy alternative to the usual pizza, come on down to the Basil & Grape Wine Bar & restaurant in Croydon! We offer a number of mouthwatering Roman Pinsa pizzas made entirely from premium Italian ingredients. Check them out on our food menu here.

We also serve a number of premium wine labels from Italy and across the world to perfectly accompany your food. If you struggle with choosing the perfect accompanying wines… Read our best food and wine pairings here. You’ll be a wine connoisseur in no time at all.